Latin America has a long history of surveillance states supported by weak democracies. Strategies for authoritarian governance have always included spying on civilians and political opponents. While technology has helped society become part of an interconnected world, it has also led to more intensive surveillance practices.[1]

This report discusses the use of artificial intelligence (AI) for profiling the electorate and tailoring campaign messages using social media. Taking the 2019 elections in the capital Quito as an example, it argues that AI is being used to polarise society as a political strategy to get elected. There is, as a result, a lack of real information available to inform the voting public.

This potential to influence election outcomes is increased when voting is mandatory, and voter turn-out is therefore largely predictable. By simultaneously drawing on government data gathered about citizens, AI becomes a powerful influencer in shaping democracy. However, this undermines the constitutional right to free and fair elections, as the rule of law is overthrown by the rule of Twitter, Facebook and WhatsApp.

The International Principles on the Application of Human Rights to Communications Surveillance[2] (adopted in 2014) define the concept of “communications surveillance” as the process of “monitoring, intercepting, collecting, obtaining, analysing, using, preserving, retaining, interfering with, accessing or similar actions taken with regard to information that includes, reflects, arises from or is about a person’s communications in the past, present, or future.”[3] The problem starts when surveillance technologies are available and used when the state’s basic survival is at risk. Ecuador was one of the first countries in the region to use surveillance technology, and was the first in the region to adopt facial recognition technologies.[4] In a context where social media platforms like Facebook and Twitter have become tools for social and political control, Ecuador also has one of the many governments that spend significant resources and employ large numbers of people to generate content online in an attempt to shape the opinions of both local and foreign audiences.

What is known as “public information” involves private data, which is collected and stored on an ongoing basis by state agencies. The state now has an accurate x-ray of the population in Ecuador – almost 18 million people as of 2018 – including, through the monitoring of social media, of their desires.

There is a dramatic increase of the surveillance of communications by states. This is happening without adequate transparency, nor information being made available to people about the surveillance or use of the data. Communications metadata and regular content displayed on a citizen’s social media profiles create a detailed picture of an individual's life, including medical conditions, political and religious viewpoints, associations, interactions and interests.

Like most new technologies, AI has the potential to increase existing problems, reinforce structural inequalities, and superimpose biases. There is also potential for good. However, what we see in countries that experience constant political protests and unrest, which are part of democracy, is a great potential for intrusion into a citizen’s life and the chilling effects this has on how democracy is enacted.

The Ecuadorian government purchased the latest surveillance technology from China in 2014.[5] While, as mentioned, Ecuador was the first Andean country to have a facial recognition system in place, the extent of its surveillance only become apparent when several newspaper reports were published, particularly in The New York Times.[6]

The use of social media for propaganda: A threat to democracy

During Rafael Correa’s government (2007-2017), trolling became a standard practice on social media and became a part of the public institutional design.[7] There are reports on state-sponsored troll farms that were initially fostered by Correa’s government. They revealed efforts to skew public opinion in favour of its policies and actions for more than a decade. Correa and his supporters even continued this practice after Lenin Moreno’s election in 2017. For example, the Secretariat of Communication said that institutional Twitter and Facebook accounts created by the former government, such as Enlace Ciudadano (Citizen’s Link), were used to disseminate information that was not authorised by the current administration.[8] Political campaigns in Ecuador are tightly controlled by the Electoral Council that oversees all political campaigning using traditional media. The law governing elections and political campaigning requires political actors to stop campaigning two days before an election.[9]

However, social media and the internet are excluded from these regulations. The exclusion of social media is important for freedom of expression, but it also allows hate speech among candidates to proliferate and the dissemination of disinformation. This is an important deficiency in the law in a country where internet penetration is around 70%, and about 90% of Ecuadorians use a mobile phone.

“Cyber troops” or troll farms are government, military or political party sponsored individuals or groups committed to manipulating public opinion using social media. Added to this is the potential to surveil social media and to build maps of the political and other preferences of the electorate, based on where and how they live and their socioeconomic demographics.

These tactics were also used in elections in countries such as Brazil and the United States with some success by right-wing politicians who managed to fuel the socio-political differences in their countries. The amount of data compiled on social media has inevitably worked to the detriment of civil rights and is now dangerously available without any control or civil supervision. Pattern recognition technology has made it easy for government officials to respond quickly to political crises, or to election result forecasts, in a targeted and effective way.

The 2019 mayoral elections in Quito

With some exceptions, voting is mandatory in Ecuador.[10] Since 2009, electoral districts have been clearly demarcated, together with citizen registration information. Although gerrymandering is not legal, the demographic divisions of these districts allow for focused campaigning and influencing of the electorate – a potential which is now substantially greater given the surveillance of social media. Social media has become an invaluable open source resource for researchers and political advisors.

Quito, the country's capital, is one of the largest electoral districts, with over two million registered voters. What happened in the 2019 mayoral elections in the city is the latest evidence of how the mixture of data mining and machine learning can determine the outcome of an election, given mandatory voting and the detailed knowledge of the demographics and desires of voters in districts. Table 1 presents data from the 2019 elections in Quito, where the electoral outcome shows a narrow percentage of votes among all mayoral candidates.

Table 1. Results of the 2019 mayoral election in Quito

These percentages are represented in Figure 1, which shows how the different neighbourhoods in Quito ended up voting along economic divides in the city. For example, the main north and central district is known as a middle- and upper-class neighbourhood, while the south and the northernmost part of Quito are known as working-class neighbourhoods with some areas that have distinctive poverty issues. All of the neighbourhoods were led by the three major candidates. 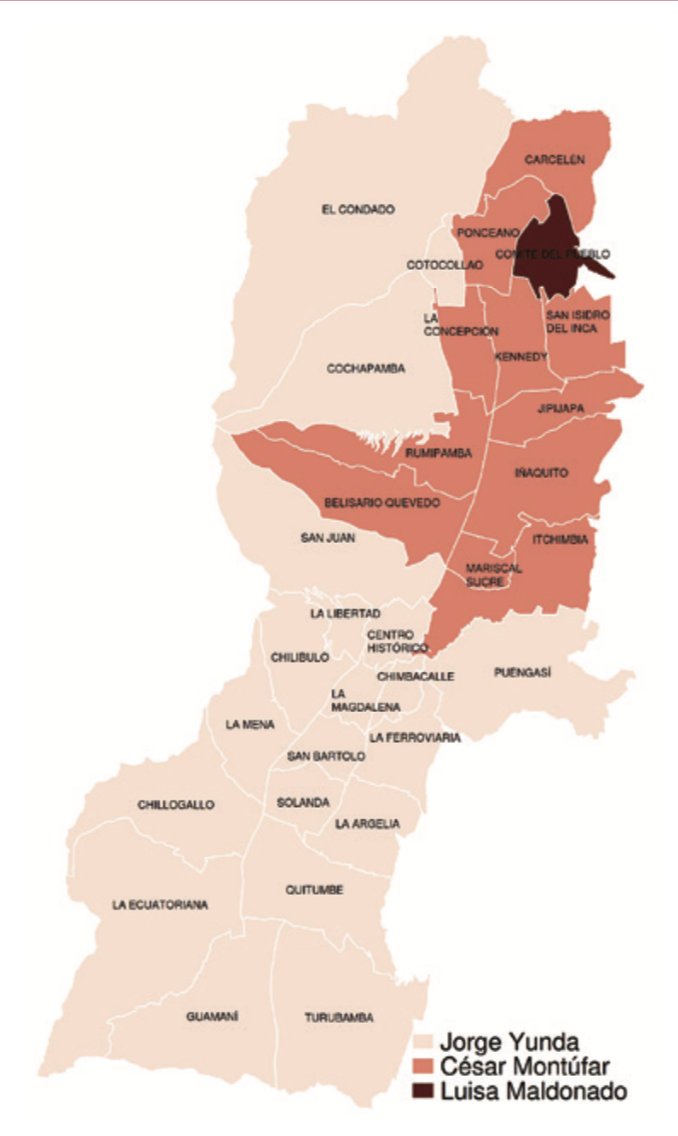 Figure 1. Electoral turnout in the city of Quito by neighbourhood

Jorge Yunda was initially a candidate from the ruling party (Alianza País) and then ran with another party (Unión Ecuatoriana) that supported Alianza País. Eventually, he won the election with just 21.39% of the vote overall. While this can suggest problems with the electoral divisions, and the fact that many candidates were in the race for the position, social media information dissemination strategies by the candidates made it easier for the contenders to succeed by a very narrow margin. The clever use of social media for political campaigning proved effective for Yunda, who benefited from a very fragmented electorate.

Micro segmentation of audiences has been a long-time political strategy when it comes to online media – and there are numerous applications that make this possible.[11] Segmentation offers a targeted profile of the type of person to whom an advertisement can be directed. This allows for focused campaigning in the context of a widely fragmented electorate. Data mining is easy when there are several different kinds of databases available to political actors. There is a wide array of user-friendly data mining apps available to amateur political advisers and even community managers of politicians. Most of them offer a varied range of information regarding the public's use of social media. Both segmentation and data mining are used effectively when cross-referenced with mandatory voting where voter turnout can be largely predicted.[12]

The election of Yunda as the mayor with only 296,096 votes is a clear indicator that a clever combination of data mining and machine learning can determine the outcome of an election. The question is raised, however, whether this results in a legitimate election.

Mandatory voting combined with the intensive use of machine learning and data mining has become fundamental to political campaigning in Ecuador. It has made voting patterns more predictable, and therefore more open to manipulation. The Quito mayoral elections are a cautionary tale of how the source of citizens’ information is used and the dangers of having it moulded according to someone else’s agenda.

Appropriate data laws are necessary for citizens to take back control of their data, and to control the use of AI and data mining that impacts on their everyday lives. In particular, laws that govern the use of social media and personal online data for electoral campaigns need to be developed. Here the International Principles on the Application of Human Rights to Communications Surveillance, which lay the foundation for a framework for privacy, should be drawn on.[13] Unfortunately, they are inadequate due to the immense amount of data harnessed by the state.

Awareness needs to be raised so that citizens understand how critical political discourse is shaped by political figures, particularly during an election. As it is, the system allows for citizens to be manipulated, and requires us to be constantly vigilant in order to overcome the attempts to control and shape our own political viewpoints, and ultimately to control democracy.

[1] As argued, there is a long tradition of surveillance as part of a government strategy to ensure its own legitimacy. Foucault’s concepts of governmentality and biopolitics shape every aspect of our lives. See, for example, Hope, A. (2015). Governmentality and the ‘Selling’ of School Surveillance Devices. The Sociological Review, 63(4), 840-857. https://doi.org/10.1111/1467-954X.12279 ; Holmer Nadesan, M. (2010). Governmentality, Biopower, and Everyday Life. New York: Routledge; and Rodríguez, K. (2017, 2 January). Surveillance in Latin America: 2016 in Review. Electronic Frontier Foundation. https://www.eff.org/deeplinks/2016/12/surveillance-latin-america

[4] Human Rights Watch has issued several reports on the dangers of surveillance technologies such as face recognition. See, for example, the joint letter to Google published on 15 January 2019 at: https://www.hrw.org/news/2019/01/15/letter-google-face-surveillance-technology

[8] Details about trolling can be found in the Freedom on the Net report for Ecuador by Freedom House. The information dates back to 2015, when these reports were initially issued: https://freedomhouse.org/report/freedom-net/2018/ecuador; see also Nyst, C., & Monaco, N. (2018). State-Sponsored Trolling: How Governments Are Deploying Disinformation as Part of Broader Digital Harassment Campaigns. Palo Alto: Institute for the Future. https://www.iftf.org/fileadmin/user_upload/images/DigIntel/IFTF_State_sp...

[9] The Organic Electoral Law states: "Forty-eight hours before the day of the elections and until 5:00 pm on the day of voting, the dissemination of any type of information provided by public institutions is prohibited.” This includes publicity, opinions or images published by traditional media outlets that encourage voters to favour a particular party. Failure to comply with these provisions results in penalties according to article 277 of the same law. https://docs.ecuador.justia.com/nacionales/leyes/ley-electoral.pdf

[10] Voting is optional for Ecuadorians between 16 and 18 years of age or over 65, people living abroad, members of the armed forces and national police in active service, people with disabilities, illiterate people, and foreigners aged 16 and up who have resided legally in the country for at least five years and are registered to vote (Article 207, Organic Electoral Law).

[12] Apps such as TweetDeck, Twitonomy and others. Each of them offers a paid option with more features. AI and machine learning are not as easy, but most training algorithms are available to the public with the use of R, a programming language and environment used for statistical computing, and its numerous support communities.