In the debate on sustainability, the role of information and communications technologies (ICTs) is becoming ever more prominent. On the one hand, ICT is a key technology to be used for achieving sustainability by making better use of resources and encouraging efficiency (greening using ICTs). On the other hand, the sustainability of the technology itself is important (green ICTs) in terms of, for example, energy use and the disposal of equipment (electronic waste or ewaste). In the process towards a greener society, creating awareness is an important step, 1 as is assembling reliable data to make decisions. One instrument that can be used for both is benchmarking countries on their achievements and actions in arriving at a more sustainable use of ICTs. Benchmarking can provide insight into the relative position of countries regarding their progress, but more importantly it can provide examples and best practices from countries that are ahead of the game. The scope of this chapter will be limited to green ICTs; however, greening ICTs is included in the benchmarking framework to some extent, as this is necessary to provide the right context for the first.

There are examples available where sets of indicators are used to benchmark “greenness” in general, but quite often these do not focus on countries – for example, they may focus on companies (e.g. the Company Report Card by Greenpeace), 2 products (e.g. the European Ecolabel) 3 or cities (e.g. the European Smart Cities Ranking). 4 Benchmarks at a national level often include indicators for measuring sustainability in the broadest sense (e.g. the United Nations work on indicators of sustainable development) 5 and include indicators that are not directly relevant to green ICTs. Examples of indicators aimed more specifically at (the role of) ICTs are the ICT Sustainability Index by the International Data Corporation (IDC), 6 which scores countries’ efforts in using ICTs to meet their CO2 emission targets, and the Green ICT Scorecard, which was developed in the United Kingdom (UK) to monitor the government’s ICT strategy. 7 This scorecard uses a list of 301 green ICT-related questions in the categories of sustainable development, corporate social responsibility, technology optimisation, and green ICT policies.

International organisations such as the Organisation for Economic Co-operation and Development (OECD) and the UN’s International Telecommunication Union (ITU) refer in their work to the important role for governments as well as companies in encouraging sustainable and green ICTs. There are examples of governments with policies in place aimed at green ICTs. The UK Cabinet Office’s 8 Greening Government ICT strategy 9 sets out the first steps that can be taken to reduce the carbon footprint by, for example, extending the life cycle of ICT purchases and reducing the number of PCs and laptops used. The ITU recommends developing such strategic planning frameworks along with action plans as important steps in dealing with ICTs and sustainability. 10 More examples of such programmes and initiatives can be found in an OECD study assessing policies and programmes on ICTs and the environment of 92 government programmes and business initiatives across 22 OECD countries, plus the European Commission. 11 Many of these target energy consumption during ICT use and using ICTs to reduce energy consumption. Only a few initiatives focus on optimising ICT value chains. 12 For business programmes, objectives relate most to supporting (green ICT) innovation, design of resource-efficient ICTs and the promotion of green ICT standards and labels (including measurement and accounting tools). The OECD has also started to research the link between ICTs and the environment 13 in which an extensive list of indicators on ICTs and the environment is suggested, including potential data sources. This list can be used to develop a set of indicators for a benchmark and already provides an assessment of availability of data.

The first step in the development of indicators for benchmarking green ICTs is the establishment of the main areas on which the indicators will focus, rather then the development of specific indicators itself. For this it is necessary to identify the main factors or stakeholders that are important in striving for green ICTs. Based on research commissioned by Hivos and TNO, a number of important areas have been identified: ICT penetration, 14 green ICT government policies (aimed at government organisations as well as at markets and citizens) and green ICTs in other domains, such as industry or civil society. A short survey among this year’s GISWatch authors identified government policy as a key area to be included in a framework for benchmarking. Regarding ICT penetration, a number of standard indicators should also be included to measure the level of ICT development. Including these helps to relate the level of green ICTs in a country to ICT penetration generally, and so ratios can be developed. 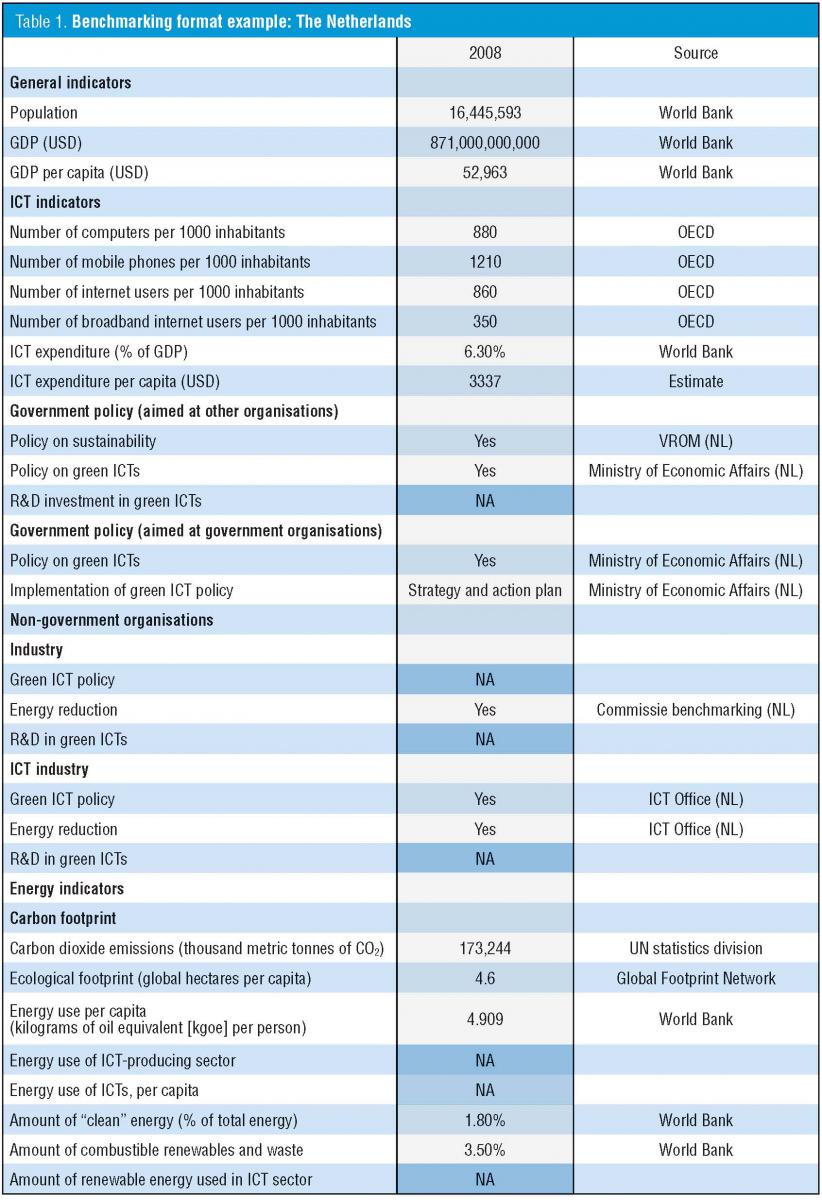 Figure 1 and Figure 3 provide a summary of the survey among the GISWatch authors. The first describes the relevance of including a specific indicator in a framework for benchmarking green ICTs. The second refers to the extent to which the authors expect it to be possible to access data for the specific indicator. 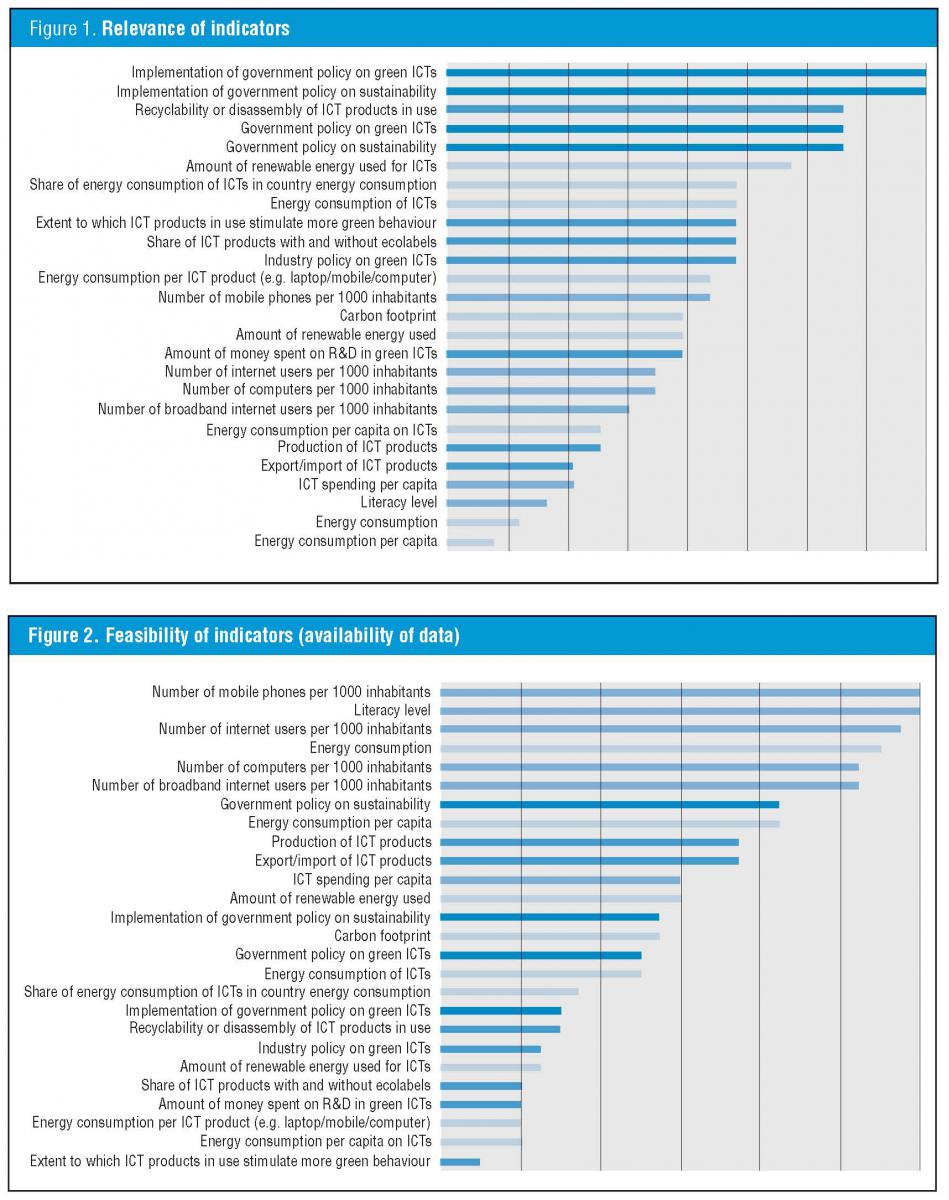 The inclusion of data on green ICTs in an indicator is important. However, this area is underdeveloped in terms of the availability of reliable and standardised data that can be used for benchmarking. This refers to indicators regarding the impact of ICTs on the environment, for example, in terms of energy use and policies for disposal of unused or obsolete equipment.

Indicators for measuring the actions taken by important stakeholders should be included. These are governments and organisations. Governments have an important role in stimulating green ICTs, on the one hand through policies that are aimed at society as a whole (e.g. aimed at consumers or industry) and on the other hand as an important user of ICTs. Indicators could include the use of energy-efficient equipment and efficient use of the equipment via power management, aimed at consumers/businesses as well as government organisations. Industry is another important stakeholder through the policies they set for themselves, for example, those dealing with sustainable design in production, the handling of discarded products, and lowering energy use and CO2 emissions.

Many indicators can be relevant, but data will not always be available for a number of countries. For example, the OECD has already established that there is lack of reliable and standardised data regarding unused equipment and its disposal, and that national household surveys in general lack questions in this area. This lack of data makes it difficult to monitor developments regarding green ICTs and assess the impact of measures taken. A framework for benchmarking countries on green ICTs should take into account the limitations of availability of data and focus on a set of indicators for which data are generally available (for example, see the work done by the OECD on assessing data availability). 17

As mentioned, actions taken by major stakeholders such as governments are a good starting point for mapping progress on green ICTs. This could be measured by establishing whether policies are available or by developing indicators that require more specific information such as a scale indicating the level of policies (e.g. from intentions for national policy to a fully implemented action plan, including monitoring instruments). Other stakeholders are not always included in current research. For example, the civil society sector in some countries can be substantial, and their role in green ICT projects, awareness raising, and policy advocacy should also be reflected in a benchmarking framework.
Further research should develop a solid set of indicators, based on the work and data of organisations such as the OECD and the ITU, and projects such as the Smart Cities Index and the ICT Sustainability Index. Moreover, further research is necessary on how to generate data that are still lacking. Finally, it may be that regional indicators in relatively synchronous and stable policy environments, such as the European Union, might be easier to develop than global benchmarks.

3 European Commission (2008) Communication from the Commission to the European Parliament, the Council, the European Economic and Social Committee and the Committee of the Regions on the Sustainable Consumption and Production and Sustainable Industrial Policy Action Plan. ec.europa.eu/environment/ecolabel/about_ecolabel/what_is_ecolabel_en.htm

8 The Cabinet Office supports the Prime Minister and the Cabinet, helping to ensure effective development, coordination and implementation of policy and operations across all government departments.

11 OECD (2009) Towards Green ICT Strategies: Assessing Policies and Programmes on ICTs and the Environment.

14 Such as the number of mobile phones, computers and internet users per 1000 inhabitants.

15 The data for the Netherlands only serve to illustrate the use of the format and are based on a short, non-exhaustive quick scan.

16 Although other (national) sources are available for some of the data, it is recommended that international sources are used to ensure the use of standardised, comparable data.