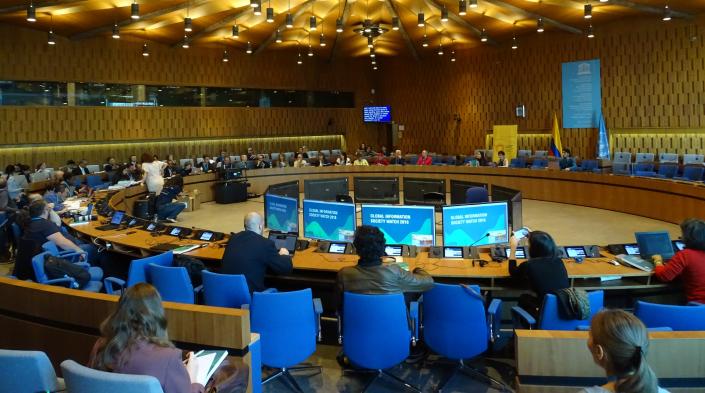 On November 13, APC held its official launch of the 2018 edition of Global Information Society Watch (GISWatch) at the Internet Governance Forum (IGF) in Paris.

Moderated by APC’s Kathleen Diga with statements from  and Valeria Betancourt, the session brought together many of the authors who contributed to the report, which was themed this year on community-owned networks for the provision of physical communications infrastructure. It is a comprehensive collection containing 8 thematic reports and 43 country reports.

Carlos Rey-Moreno, who works on community access networks at APC and contributed to this edition, started off the presentations by noting that community networks are becoming recognised as a paradigm that can actually connect communities and provide access, and that furthermore there is considerable proof that they contribute to many sustainable development goals.

This set a positive tone for the speakers to come, who represented diverse voices from around the world, speaking to the challenges and successes of community networks, as well as providing historical context and potential for further development.

Starting with contributors to the thematic reports, Leandro Navarro from the guifi.net community in Catalonia explained that all technologies that enable communication have been explored by community networks, and that many hardware and software possibilities can be combined for access. In speaking about his contribution to GISWatch, he said, “This chapter speaks about how to enable communities and individuals to experiment with the technologies, to adapt, localise and use them, to enable everyone to connect.”

Rhizomatica’s Erick Huerta brought a participatory element to these statements, saying, “We hope that each group of people in their countries can contribute with their government to develop regulations.” His chapter on legal frameworks for community networks in Latin America outlines some of the regulation issues in the region, particularly for areas where there is not yet coverage by service providers.

The lack of regulation in telecommunications along with monopolisation by large-scale, national providers is indeed an ongoing struggle in the development of community networks. Steve Song, a Mozilla Foundation Fellow and partner in the Local Access Networks project, provided some historical contextualisation for this, explaining that “the history of telecommunications is rooted in technology and investment that could only be conceived of by governments... Millions and millions of dollars have been poured into national networks, but that has slowly changed to where now the private sectors build up these large-scale national and international networks.”

Despite this, he explains that we have gone through another change in the last 10 to 15 years, where “instead of having to build every aspect of the network as a telecommunications operator, now this is becoming disaggregated, and the ability to deliver state-of-the-art telecommunications services by a small operator is now within reach of anyone.”

Débora Prado of Lavits/Labjor-Unicamp in Brazil explored such concepts meaning and contribution through a discussion of feminist infrastructure and community networks. She raised a key point by asking, “How can we make our community networks more diverse and more welcome and more safe for different groups of people?” The concept that having people at the heart of the issue and finding ways to build inclusion was therefore further developed.

Looking deeper into historical contexts, Nicolás Echániz from AlterMundi in Argentina spoke about how community networks have changed and evolved, drawing an illustrative comparison to food production. He explained that if we were to lose control of the technology layer of food, which can be likened to seeds, by having them controlled by external agents, we would not accept this in our fight for food sovereignty. However, with community networks, the struggle is not as clear. He proposed that “we need to put more thought, resources and work on recovering this layer and (re)creating our tools in this new scenario.”

Following on these thematic reports, the audience then heard from authors who contributed country reports to the collection, starting with Julián Casasbuenas G. from Colnodo in Colombia, where they have been experiencing difficulties in obtaining permission to use a small range of spectrum for community networks, which poses further challenges for building them into a legal framework. They have therefore been working with citywide spaces to set up connectivity to the internet, and continuing to press governments in the region. Within Colombia, the big concern around community networks is how to make government regulations be in favour of these kinds of projects.

In the chapter on Thailand, Preechai Mekbungwan of the Asian Institute of Technology spoke about the need to give more people access to affordable internet, while in the chapter on Mexico, Peter Bloom of Rhizomatica described working with indigenous communities to increase their skills around technological aspect of networking. For him, it is important to consider “how to create a network that also serves the interest of the community as well as allowing people to access the open internet.”

Echoing this sense of community-based initiatives and looking more in-depth at the situation in Catalonia, Roger Baig of guifi.net impressed the audience by stating that they currently have thousands of active nodes, both WiFi and fibre. Their goal, he explained, “is to build a stable production network, so we care about uptime, performance, support, users, etc.” His presentation made clear the level of dedication shown by the organisation in improving accessibility among people.

Moving once again around the world to Venezuela, Maureen Hernandez looked at some of the challenges being faced on the ground in setting up these networks, because “even when we manage to deploy connectivity trials, it's very difficult to work in this environment.” Indeed political, geographic, economic and technical challenges can create obstacles for the creation of stable networks.

In Kyrgyzstan, the local ISOC chapter notes that cost is a big challenge to building fibre optics, particularly because the harshness of the terrain and the extreme winter conditions make it difficult to build the infrastructure. Their solution was to choose one location, which is popular among tourists, to base their network. Although the large-scale operator did not have plans to build there, they became very interested when they learned that there was interest in building a community network, and in turn became active and brought internet to the region.

John Dada of Fantsuam Foundation in Nigeria shared this challenge of building community networks in remote areas, explaining that “rural communications are so far away from government, that if they waited for reconstruction to reach them, they'd never get anywhere.” This is where community networks are handy, he noted. Two crucial points are illustrated in his chapter, including the resilience of community networks and the changing face of the regulatory system in community networks.

Further echoing the challenges of remote networking, Ucha Seturi of the Small and Medium Telecom Operators Association of Georgia described a successful private-public partnership in Georgia consisting of  nine stakeholders, all of whom contributed to building a network in some of the most remote regions of the Caucasus mountains. Renata Aquino Ribeiro of the ISOC chapter in the Caribbean region added that extreme conditions, such as hurricanes, can create settings where building community networks may be the only option for people to access the internet and maintain communication. For Eduardo Peralta of ISOC in Honduras, this is particularly critical in their work with migrants, saying that “an existing strong community bond was a vital part for a successful community network.”

Each case, regardless of location, shows that it is people driving these projects, not just technology. Even in remote areas where there is a lack of internet, there are ways to create access as long as there is willingness, as described by Vassilis Chryssos in Greece. Along with several friends, they were able to figure out how to provide internet connectivity to remote urban villages, and their community network, Sarantaporo, now serves 3,500 people. They were able to reach out to global community networks and use existing knowledge to figure out how to provide local access. For him, there are three basic ingredients that helped them develop their community network: infrastructure, building local community, and education and training of local citizens.

The author presentations were concluded by Osama Manzar speaking on behalf of his colleague from the Digital Empowerment Foundation in India, Ritu Srivastava, who wrote a chapter in GISWatch but was unable to attend. He explained that with 600,000 villages in India, getting widespread internet access presents a massive challenge. He described four possibilities to do so, including building expertise within villages and communities; influencing government to actually recognise effort and to allow public hotspots in India; using 5 MHz technology; and for the government to bring broadband into all villages.

What was clear throughout these presentations is that despite the location, there is a need to ensure access to the internet for communities around the globe. Being located in remote areas or areas in difficult conditions due to natural disaster, conflict, etc. are no less deserving or need of connectivity than those in urban centres. In fact, one could say that the opposite is true. For people who are already living in isolated regions, having a connection with the world provides crucial and sometimes life-saving benefits.

Large-scale private companies and national internet providers often neglect these regions because they do not see them as being profitable. Indeed, there are ways that they can provide support and facilitate the process. As Steve Song said at the GISWatch launch, “there is so much capacity that it can be shared without disadvantaging anyone.”

Community networks can have a great impact on the quality of people’s lives, there can be no doubt about this. All of the speakers at the GISWatch launch stand strongly behind this, along with all the authors who contributed to this extensive collection. There are many creative and resourceful approaches to deploying community networks, as shared by the contributors. One of the greatest strengths of this collection, as one observer noted, is that it is not simply a country report, but rather covers many countries and various themes. We thank all of the contributors for sharing their experiences and support them in their work.

An online version of the 2018 GISWatch report can be found here.

Information on ordering a hard copy can be found here.

Watch the presentation featured during the event here and take a look at the pictures of the launch here.