2020 - Technology, the environment and a sustainable world

Technology and the environment: Lessons learned during COVID-19

The COVID-19 pandemic has accelerated the process of digital transformation and has forced many people to do remote work and online education in order to comply with the lockdown measures taken by the Colombian government to curb the expansion of the pandemic. This has caused a significant increase of internet use, especially in urban areas, and it has also forced families to acquire more than one device to connect to lessons or work meetings.

This report also addresses the issue of the disposal of electronic waste, which undoubtedly constitutes an environmental problem due to the massive use of these devices, and which in future years may generate great negative effects on the environment.

Finally, conclusions and actions to be followed from the analysis of the information collected in the report are proposed.

In Colombia, 76% of the population lives in the municipal capitals, making it an eminently urban country where the inhabitants of the four largest cities, Bogotá, Medellín, Cali and Barranquilla, represent 25% of the total population.[1]

The pandemic has forced the population to be in lockdown; while many employees perform their duties through telecommuting, children and young people are receiving lessons remotely using different platforms offered by schools and universities. Families who previously shared only one computer have purchased or rented a computer or tablet for each family member in order to comply with their work and educational responsibilities. This has led to an increase in internet use, especially in urban areas.

However, using the internet from an electronic device at home is a privilege that is not available to the majority of the population. In rural areas, internet connections are often scarce and with limited bandwidth which does not allow access to content such as video conferencing, restricting participation and full access to resources required for virtual education, remote work and other options such as telemedicine. This gap shows the digital divide between urban and rural areas and contributes to worsening other socioeconomic gaps and significant inequalities present before the pandemic.

Multiple newspaper articles published in the media during the pandemic show how different initiatives and businesses have been reinvented in order to be able to survive economically. In this sense, technology has played a fundamental role for the marketing, supply and delivery of products and services, while observing the rules of social distancing. Likewise, people who used to refuse to use new technologies must now use them in their daily tasks and work. For instance, teachers who were previously resistant to incorporating technological innovations in the classroom have been forced to do so as the only alternative to connect with their students.

Impact of the use of technology on the environment

To confront the COVID-19 pandemic, Colombia initiated a mandatory lockdown on 24 March 2020. At the time of writing this article, this had been extended until 1 September 2020. At the beginning of the pandemic many Colombians began to work from home. This situation raised the question about the impact on the environment due to the increased household electricity and internet consumption. In order to evaluate this impact, we investigated multiple sources to determine the energy consumption of the internet, especially by the traffic generated by the network. Unfortunately, it was not possible to find an exact value to determine this consumption during the months of mandatory isolation. However, sources[2] agree that an estimated 5% of energy consumption in 2012 was due to information and communications technologies (ICTs).

The generation of electric power in Colombia for the period January-August 2019 was 46,300 GW (gigawatts). If this value is extrapolated for the total consumption in 2019, the approximate power generation was 69,450 GW. This is an average of 5,787.5 GW per month. Of the total value of gigawatts consumed, 3,472 GW would correspond to the ICT sector with an average per month usage of 289.33 GW.

For the period January-February 2020 (before COVID-19), internet traffic through NAP was 45,000,000 gigabytes/month, increasing 51.85% on average between the months of March-April-May. This indicator can then be used to estimate the increase in energy consumption due to the country's internet traffic.

Considering the CO2 generation data of 0.649 kg CO2/kW (kilowatt), it would give an increase in CO2 emissions of 150,000,000 kW = 97,350,000 kg CO2 or 97,350 tonnes of CO2 per month. However, in reality this value is lower for Colombia as the country generates 79.43% of its energy from hydroelectric sources,[4] reducing emissions to an approximate value of 20,024 tons of CO2. In theory, hydropower is greener than power generated from fossil fuels such as coal and natural gas sources.

Although Colombia relies heavily on hydroelectric energy, which is considered a clean energy, there are factors associated with this type of energy generation that can produce negative impacts on the environment. In 2019, an ecological disaster occurred in the Cauca River – Colombia's second largest in length and coverage – where the Ituango hydroelectric plant is under construction. On 5 February 2019, due to structural failures, the only open gate of the Hidroituango dam was closed. This prevented the natural flow of the Cauca River, causing the instability of the terrain and affecting more than 100,000 people along the river's banks. The real damage caused by this situation is very difficult to quantify since the river dried up for several days, causing serious damage to the population as well as the death of natural fauna dependent on the river.

One very notorious impact of the pandemic in large cities such as Bogotá – which according to the latest population census of 2018 has 7,181,469 inhabitants[5] – is the reduction in traffic of private vehicles due to the fact that the majority of car owners are working from home.

The reduction in the use of private vehicles has also represented a decrease in gas consumption, which dropped 65% since mid-March when the first lockdown measures were taken. For April the fuel consumption averaged 2.1 million gallons per day.[6]

Although ICTs represent an increase of 20,024 tonnes of CO2 per month, the savings (gas only, excluding diesel) represented a reduction in emissions of 574,563 tonnes of CO2.

Another important aspect of a reduction in vehicular traffic is the effect on air quality. In the case of Bogotá and according to the Environmental Observatory of Bogotá, there is a low indicator of 27 mcgrs/m3 of particulate material less than 10 microns µ {PM10} average monthly, which compared to April 2019 (34 mcgrs/m3) represents a reduction of 20%, possibly influenced by the decrease in vehicles in the city.[8]

Figure 1. Gas and ICT-related energy consumption and CO2 emissions during March to June 2020

The survival of the ecosystem is highly dependent on sustainable development. While the reduction of CO2 emissions has a positive impact on air quality, the pandemic is also having a devastating impact on the quality of life of all those workers who have lost their jobs, and their sources of income. Because of this their social welfare and that of their families is now at risk.

In conclusion, large Colombian cities have reduced their emissions and improved their air quality. However, it seems that the improvement of air quality in cities is not reflected in the atmospheric CO2 concentration at the global level, as shown by the Mauna Loa Station.[9] 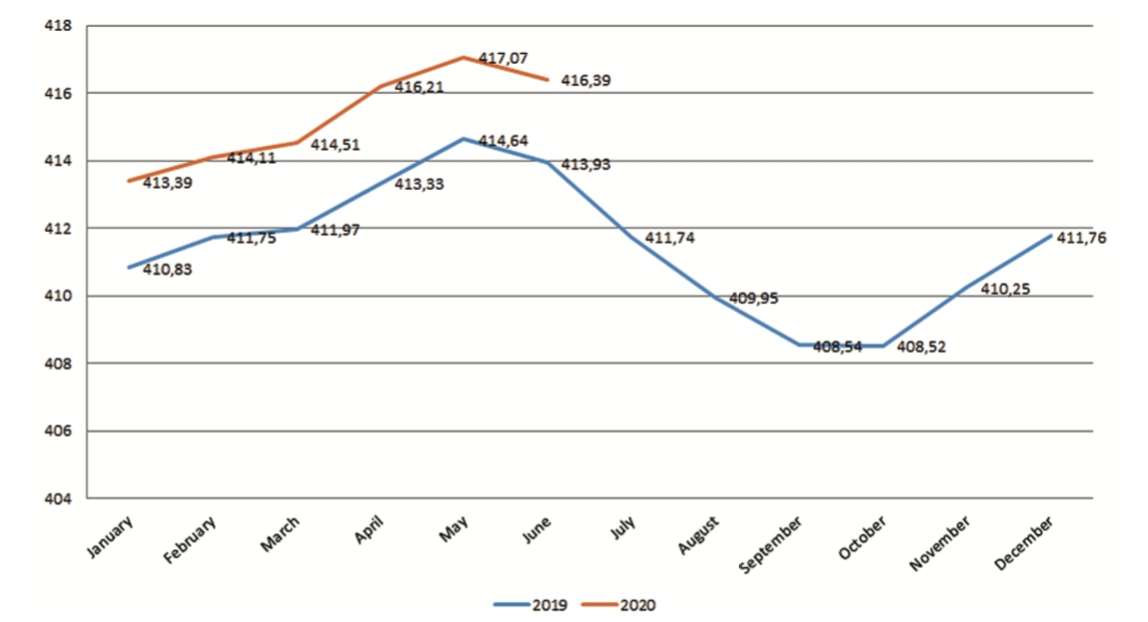 Another aspect to consider, especially in the future, is the increase in the use of devices for internet access and its impact on the environment. Colombia has shown a sustained increase in the generation of electronic waste as indicated in the GISWatch report for Colombia in 2010, where it was mentioned that the calculated value of electronic waste was 3.18 kg per inhabitant.[10] By 2019, however, electronic waste amounted to 318,000 tonnes, equivalent to 6.3 kg per inhabitant,[11] representing an increase of 98.1% in nine years. Surely this value will increase even further in the coming years due to the effects of the pandemic.

Ensuring the reuse and subsequent proper disposal of electronic waste will be a challenge for environmental protection in Colombia.

While there is a perception that increased energy consumption due to remote work during the pandemic has led to the higher emission of pollutants such as CO2, there are other effects such as the reduction of individual transport in private vehicles in large cities, which has significantly improved the quality of the air. This situation is expected to continue after the pandemic, as many companies have made significant investment in equipment and infrastructure to improve the remote work of their employees and have established planning and monitoring mechanisms to maintain telework in the long term. On the other hand, many workers express their preference for this modality, which improves their quality of life by avoiding trips in a city like Bogotá which lacks a sufficient mass transportation system and where it is common to spend more than an hour on short-distance trips. In September 2019, Bogotá was the second most congested city in the world according to Waze.[12]

The pandemic has shown us the lack of internet coverage in many localities and rural areas, further isolating communities that do not have the possibility to move away from home to get a connection. It is important to extend internet coverage in these areas and guarantee quality access to be able to use all internet services.

While a reduction in CO2 emissions is estimated in absolute terms, it should not be ignored that progress can be made in reducing ICT emissions per person, especially if awareness is raised about the purchase and use of electronic devices and their appropriate final disposal once they reach the end of their service life.

In conclusion, breaking nature's balance causes unsustainable development because there is a relationship of interdependence between people and their natural environment. An imbalance in the ecosystem generates a negative impact on the quality of life of individuals.

The following action steps are suggested for Colombia: