Using different kinds of electronic equipment today is so much a part of our daily lives, we hardly think of the way the world would be without electronics. The extreme growth rates in take-up of information and communications technologies (ICTs), minimal initial set-up costs and ever-shortening planned obsolescence rates result in large quantities of electrical and electronic equipment being added to the waste stream.

In recent years a great deal of attention is being devoted to the environmental impact of computers and other electronic equipment, as these items pose a massive problem for municipal landfills and health hazards to human life.

Pakistan, a country with a diverse landscape, hosts large deserts, gushing rivers, and a number of the highest peaks in the world. But its environment is marred with many environmental issues such as uncontrolled urbanisation, poor solid waste management, degradation of forests, scarcity of water, excessive use of pesticides for agriculture, poor environmental standards in industries, and weak governance structures. Environmental laws enacted are not enforced properly to help stop the disasters.

Being an agriculture-based country, experts consider climate change a great threat. Listing the vulnerabilities, they are concerned about crop failure and loss of livestock, which will lead to food insecurity and serious conflicts over resources. Droughts, floods, scarcity of water resources, health risks, meagre energy resources, and socioeconomic and socio-political instability can play havoc with the country’s large population.

The recent monsoon floods that started in the last week of July 2010 are also thought to be influenced by climate change – increased temperatures, rapid glacial melt and unusual precipitation.

As part of Pakistan’s commitment to the environment, the then prime minister of Pakistan presented the NCS at the Rio Earth Summit in 1992.1 This also proved to be the starting point of the revolution of ICTs in the country, when the United Nations awarded a grant to Pakistan via the International Union for Conservation of Nature (IUCN) for the implementation of its much-acclaimed Sustainable Development Networking Programme (SDNP). 2 The SDNP initiative pioneered email and internet in the country for use by the masses.

The National Environmental Policy 20055 and Mid-Term Development Framework 2005-20106 are other important milestones. The environmental priorities established in these various government policies are summarised in Table 1.

Solid waste management in the policy documents always refers to municipal or industrial waste, while climate change is never referred to in the context of ICTs and environment sustainability. To bring these issues to the fore, there is long way to go with specific interventions, focusing on the government in general, but the private sector in particular.

Pakistan is party to the following chemicals- and waste-related international conventions: 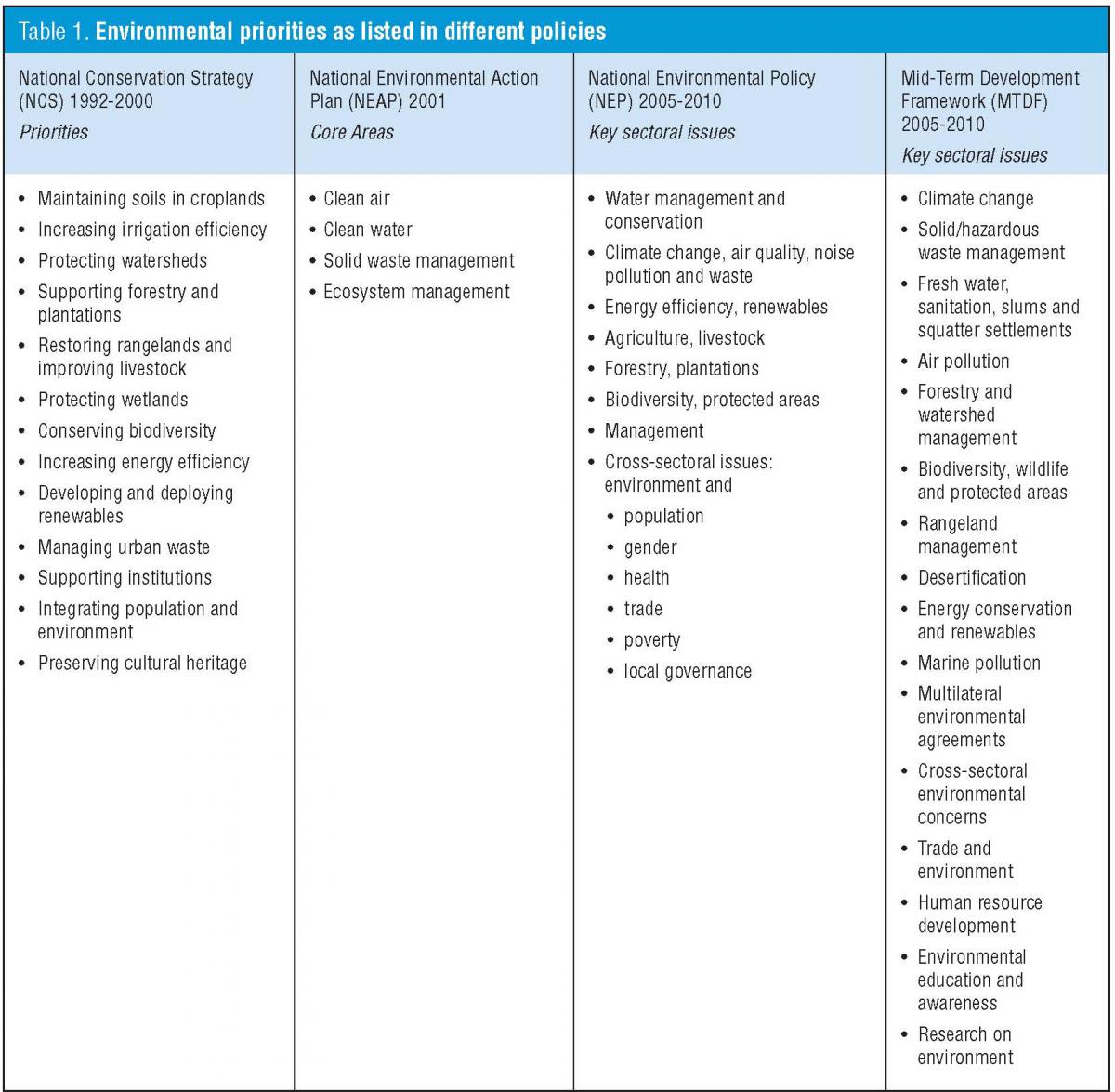 When it comes to electronic waste (ewaste), Pakistan is at the receiving end of the “ewaste divide” due to widespread poverty and sharp inequality. Some may even see this as evidence of our greater ability to use and reuse material items more effectively than the wasteful West. Yet this inconsiderate attitude that results in ewaste dumping is already emerging as one of the major hazards to the health of both the environment and the people.

We already know that ewaste is as much a problem as other waste that is regularly generated by industrial societies. The health and environmental hazards associated with ewaste are mostly due to electronic goods containing significant quantities of toxic metals and chemicals. If these are left untreated and lie around in landfills or dumps, they leach into the surrounding soil, water and the atmosphere, thereby generating obvious adverse effects for human health and ecology. Many elements of the waste are hazardous, as the circuit boards, cathode ray tubes, connectors and other elements that are essential for most electronic goods almost always contain poisonous substances such as lead, tin, mercury, cadmium and barium. 7

Old electronics are often lumped into municipal waste and then burnt, releasing toxic and carcinogenic substances into the air, which may stunt brain development, disrupt hormone functions or affect reproduction. Chemicals such as beryllium, found in computer motherboards, and cadmium, used in chip resistors and semiconductors, are poisonous and could lead to cancer. Chromium in floppy disks, lead in batteries and computer monitors, and mercury in alkaline batteries pose severe health risks.

Since recycling of ewaste often results in very high costs, developed countries have a tendency to dump their ewaste into underdeveloped countries like Pakistan, often after the equipment has become obsolete. In Pakistan, ewaste dumping is encouraged by a number of legal, economic, social and political factors. Disparities in domestic legal standards between developed and developing countries have encouraged transboundary North-South movements of waste and toxic products. Pakistan faces the problem mainly on two fronts: on the one hand, it is used as the dumping ground for over 50,000 tonnes of ewaste 8 by developed countries and, on the other, it generates thousands of tons of local ewaste every year. However, many industrialised European Union countries have introduced stricter environmental standards and waste disposal legislation and have made regional arrangements concerning transboundary movements.

Pakistan is a signatory to the Basel Convention9 and ratified it on 24 July 1994. This convention monitors the movement of toxic wastes like ewaste. However, the convention becomes flexible when the goods are to be used for the purpose they were designed for (i.e. old computers are to be used as second-hand machines). As a result, the relevant regulating agencies in Pakistan allow the import of used computers, as these will be reused.

Since much of these consignments are in practice stripped and sent for recycling, the rules of the Basel Convention are actually ignored because the machines are no longer used for productive purposes. For hazardous substances this is the only international environmental treaty signed by Pakistan’s government. 10

The prices of used computers are low compared to new ones, creating an increase in demand for old computers. However, such equipment also uses up more energy and people are unaware of both the environmental and health problems which can arise when these are disposed of, usually in a very short span of time.

Karachi is a major dumping ground for ewaste from all around the world. Although the dumping of waste is prohibited under the EPA Act of 1997, 11 no serious action is taken. Most of the scrap is dumped in the town of Surjani. In the district of Lyari, livelihoods are eked out by hundreds of workers including women and teenage children who dismantle the electronic scrap and extract valuable components such as copper. It may appear to be a convenient choice of making a living on trash, but the workers have no idea of the hazards they are exposed to. They usually burn the plastics without proper safety measures or use furnaces that have serious health consequences.

In the Shershah area, unusable parts and machines are brought to enterprising recycling initiatives, which are overwhelmingly from the informal sector, where occupational safety laws, safety measures and prerequisites such as properly ventilated working areas are rarely in place.

The workers, mostly women and children, are exposed to all sorts of toxins. The waste generated by this industry is dumped in the Lyari River, and eventually finds its way into the Arabian Sea, where it contaminates the marine ecosystem. Some of the waste is dumped in landfills, where it contaminates the soil after leaching through. Such landfill sites are also not properly administered.

So far no strategy has been devised to tackle ewaste in Pakistan, nor are there provisions to regulate ewaste disposal in the national IT Policy and Action Plan of 2000. 12 At the South Asian Association for Regional Cooperation (SAARC) level there is a ban on hazardous waste and radioactive waste in its environmental strategic development goals, 13 but unfortunately ewaste is not included in it.

Given the above background and issues, Mobilink, a leading mobile phone operator in the country, has initiated the Mobilink Handset Recycling Program,14 in collaboration with the Pakistan Association of the Deaf (PAD) and the Disabled Welfare Association (DWA). This programme aims at sharing the benefits of mobile communication with the hearing impaired and the disabled, as well as minimising the environmental impact of ewaste through recycling.

Old and damaged mobile phones, batteries, chargers and accessories, irrespective of the model and make, are donated by simply dropping them in the recycling bins that have been specifically placed for this purpose at select Mobilink centres across Pakistan.

The company has teamed up with Ring Pakistan, a leading multinational specialising in GSM products and after-sales services, to restore functionality using high environmental and social standards. Repairable and partially repairable mobile phones and accessories are shared with PAD and DWA.

The donated mobile phones found to be unusable are disposed of in proper manner by Waste Busters, 15 an internationally recognised, fully integrated waste management organisation.

E-waste is an issue which clearly must be addressed immediately before it becomes even more of a problem. Strategies must be evolved to reduce the generation of ewaste, to prevent the legal or illegal import of such waste, and to develop feasible and safe ways of dealing with it within our own context and requirements. Otherwise the unregulated accumulation of ewaste may well lead to a public health disaster in the near future.

Pakistan is a low-emission country, but at the receiving end of negative impacts of climate change. Vulnerable as many developing countries are, the focus and attention of policy and development around climate change issues in the country remain on traditional areas including agriculture, water resources, food security and disaster management.

While several ICT-based systems and procedures are deployed to mitigate and minimise climate change impacts (e.g. early warning systems), an integrated approach to look at the use of ICTs and their connection with climate change is still missing.

However, telecommunications operators are now getting increasingly concerned about climate change and how they can adapt to minimise its negative impacts. On 9 August 2010, the Pakistan Telecommunication Authority (PTA) and cellular mobile operators in Pakistan signed a memorandum of understanding16 on infrastructure sharing. By signing this memorandum, the mobile companies have agreed on the long-awaited tower-sharing concept, which had been implemented on a small scale earlier. This arrangement will greatly help reduce environmental hazards and fuel costs for running mobile phone towers. It is expected that wireless local loop (WLL) companies will follow suit. A group has been formed that will recommend the procedures for sharing towers for WLL companies operating in Pakistan.

The e-waste issue so far has received little attention from the government and NGOs. To date, no scientific study has been made to assess the impact of ewaste processing on our environment. There is no reliable data available on the volume of used electronic components imported and the fraction of it recycled or dumped as solid waste. There is a dire need to determine the detrimental impact of ewaste processing on public health. This necessitates fast-tracking measures and a national strategy to avoid transforming the cities of Karachi and Lahore into dump yards.

A combination of legal, economic, social and political factors are contributing to the emergence and expansion of movements of hazardous waste and products from industrialised to developing countries. The majority of the world’s toxic pollution is produced in Organisation for Economic Co-operation and Development (OECD) countries, which generate more than 95% of all hazardous waste – the principal waste-exporting countries being Germany, the Netherlands, the United States, the United Kingdom and Australia.

In order to address the ewaste crisis in Pakistan:

1 Also known as the United Nations Conference on Environment and Development: www.un.org/geninfo/bp/enviro.html

7 Figures regarding major exporters of ewaste are available at the Electronics TakeBack Coalition website: www.electronicstakeback.com/Tools/Facts_and_Figures.pdf